In this post, we’ve learned about reverse engineering. What we will talk now is one of the tool used for that called OllyDbg.

Before discussing OllyDbg, we must know what is debugging. Debugging is a structured process to find and reduce the number of bugs or defects in a computer program and repair it. When there are a bug in a system, especially when there are lots of subsystem in it will make the debugging process become harder because a changes in one may cause bugs appear in the other. 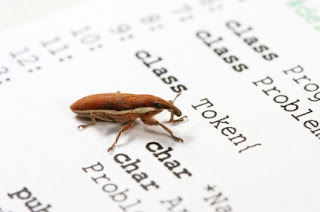 To do this debugging process, we need a debugging tool called debugger. It is used to test and debug the program. It can see what activity a software runs on the memory. Based on that thing, we can see at what point a bug appear. OllyDbg, Debugger, and ImmunityDbg is the example of a debugger software.

So, after reading some explanation above I think you must’ve already know what is OllyDbg. OllyDbg is an x86 debugger that emphasizes binary code analysis, which is useful when source code is not available. It traces register, recognizes procedures, API calls, switches, tables, constants, and strings as well as locate routines from object files and libraries. The software is free, but the shareware license requires users to register with the author.

Like I said before, OllyDbg is often used for reverse engineering of programs, usually used by hackers and crackers to crack a software. It is often the primary tool because of its ease of use and availability. A programmer can use this software too to make sure that their program is running as programmed.